We are open. Our opening hours may change slightly from week to week. 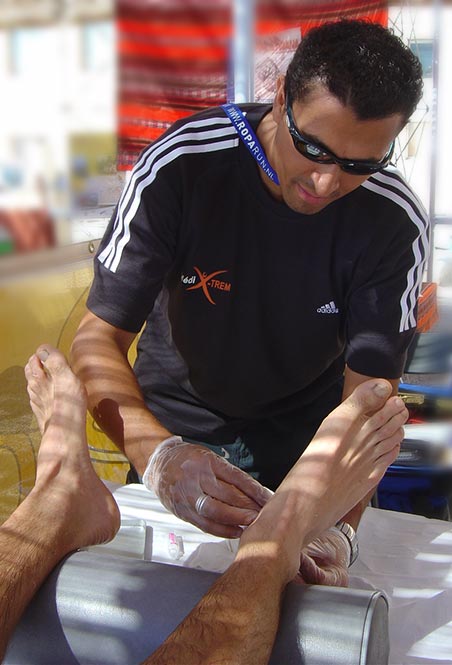 Mougnir Boumedjane holds a Postgraduate Certificate in Pharmacology as an Independent and Supplementary Prescriber.

He is identified by an annotation next to his name (IP /SP) in the relevant professional register (HCPC CH32184).

Independent prescribing permits the independent exercise of clinical reasoning and professional judgment by a Podiatrist Independent Prescriber to prescribe any licensed medicine (this includes “off-label” medicines subject to accepted clinical good practice) from the British National Formulary, within national and local guidelines. For any condition within their area of competence in the management of diagnosed and undiagnosed pathologies of the foot and related structures, with the exception of controlled drugs (for which there is a specific list).

The Sports Podiatrist and the Passion.

Mougnir holds a Master of Science (MSc) in Theory of Podiatric Surgery with Merit from Queen Margaret University (Edinburgh), and is certified in Local Anaesthesia and Nail surgery from Glasgow Caledonian University.

He graduated in Podiatry & Chiropody from the French School of Podiatry and Physiotherapy in Paris in 1998, pursuing a clinical and academic career in Sport Podiatry, Biomechanics and Posturology.

In France he managed his own Sports Podiatry Clinic for over 16 years in Fontainebleau.

In 1999, he set up a Podiatry department in the HABIB Medical Center (Riyad, Saudi Arabia).

After he gained his Certificate in Sport Podiatry from the University of Medicine Paris VI La Salpêtrière in 2000, Mougnir started his consulting activities for Sport-Akileïne, Adidas and New Balance.

In 2003, he obtained a Certificate in Sport and Physiology and went to Seoul during the Student Olympic Games lecturing on fencing and gait analysis.

In 2009, he passed a Diploma in Posturology, focusing on the management of postural, balance and lower limb troubles.

Mougnir’s passion in podiatry started at a very early age at 16. He was training as an elite fencer when he sprained his ankle and was referred to the only French sports podiatrist. This led to Mougnir finding his new vocation combining both sport and podiatry.

In his early years in the profession, and being a keen water-skier, he designed and manufactured orthotics, and became a consultant to the members of the French water-skiing team.

Mougnir’s passion led him to travel all around the world as a podiatrist and to develop a strong sense of empathy towards his patients. In 2004 he set up and launched Medi-Xtrem, as medical assistance for sport elite events.

In 2005 he became a Lecturer in Sport Podiatry at the University of Medicine Paris 13, and is also well known as a podiatry consultant on the French TV5 health channel show (Le Magazine de la Santé) and Elle, Triathlete and Running magazines.

Still a keen sportsman, he trains in triathlon, regularly goes surfing, and is also an elite fencing coach at Escrime Academy in London (qualified as Fencing Instructor since 1992.

Made with ❤ by Dot IT